Running street battles between hawkers and City askaris (watchmen) have been on the rise in downtown Nairobi over the past few months. In early June a hawker was shot dead near the Fire Station after he was chased by City askaris attempting to flush informal traders from the streets of the Central Business District (CBD). The shooting resulted in a large confrontation between askaris and hawkers, with bystanders running for cover as rounds of tear gas and live bullets were shot to disperse the riot.

The issue of what to do with the hawkers has been raging for a long time but has gained prominence following the election of Dr Evans Kidero to the position of Nairobi Governor earlier this year. Part of Kidero’s election manifesto was a promise to focus on cleaning up the city, making it more secure and creating employment amongst the youth. It is still early days, but so far Kidero appears to have focussed more on curbing corruption (a mighty task in itself) than on creating a integrated strategy to achieve his other stated objectives.

The argument for eliminating informal traders from the CBD is that an increase in the numbers of hawkers in the streets is generally accompanied by a rise in violent crime and a decrease in revenue for the city’s administration. In addition to this, hawkers are at odds with CBD shopkeepers who resent the fact that they are obliged to pay taxes but get undercut by the stalls that crowd the pavements, operate with lower overheads and physically prevent access to their legitimate trading establishments.

On the other side of the spectrum, members of the hawkers union insist that contrary to people’s perceptions, they successfully diminish crime because they provide employment to youth that would otherwise resort to making money through unlawful and potentially violent means. Furthermore, the hawkers argue that given the amount of bribes they regularly pay to the askaris, their business is in fact helping not hindering the growth of the city’s economy.

In the past, attempts to move the informal vendors to designated market spaces like Muthurwa Hawkers Market (just to the east of the CBD), have failed because an enclosed out-of-the-way market does not offer the rich pickings that setting up shop on a commuter route does. People are generally more inclined to buy items off the streets because they are within arm’s reach and offer negotiable prices. 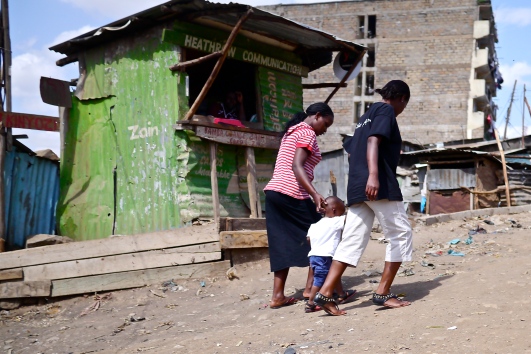 Breaking down a complex problem

The difficulty is that there is no one single answer to the issue of unregulated traders. Any proposed solution must take a series of important elements into consideration. Amongst these is the fact that there are different types of informal traders, that they do not only operate in the CBD and that in many cases they are providing an invaluable service, filling a vacuum that legitimate businesses have so far failed to fill.

To begin with, treating hawkers like a problem that can simply be chased away is a failure to take into consideration the extent of the issue. Nairobi is a city with close to 3.5million people with somewhere in the region of a 50% unemployment rate. Considering that around 60% of the population live in informal settlements, we can surmise that if people do not have the money to put down a deposit for the rental of a bricks and mortar house, they do not have the money to set up an official business either. As result, the informal sector in the city provides employment where the formal one has failed to, something that must be taken into consideration when talking about creating employment opportunities for the youth.

It is also important to take into account the spatial-geographical distribution of the informal traders. While their presence in the CBD is viewed as increasing congestion and making the city less accessible, their operations elsewhere can come as a relief to customers who would otherwise be forced to search further afield for their needs. So, for example, hawkers in informal settlements trade goods that would otherwise be sold in shops in the “formal” city that are not easily accessible to local residents. Similarly, traders that operate in and amongst Nairobi’s extended traffic jams are not undercutting anyone or providing unfair competition but can instead be a welcome source of distraction for the suffering motorist stuck on a small stretch of road for hours on end.

Informal markets that spring up around pedestrian commuter routes – for example the Ngara/Globe Roundabout node which has one of the most thriving informal secondhand clothing markets in the city – provide commuters with a chance to browse clothes in a convenient setting without forcing them to go out of their way to update their wardrobes. Finally, the  contribution made by street vendors that sell food and refreshments to construction workers and other employees on their lunch breaks should not be underestimated: these traders are providing an important and needed service which no one has yet formally managed to create.

So what can be done? How does the County administration harness the “good” part of having a thriving informal market which provides services and employment while at the same time clamping down on its “bad” elements?

Obviously any solution that is proposed will have to take into account all of the different stakeholder’s needs and attempt to aim for practicality rather than idealism. It is not feasible to talk about eliminating hawkers without proposing an alternative means of employment for these legions of people.

With regards to the issue of the CBD hawkers, one proposal that has surfaced time and time again over the years is that they be allocated temporary licenses to operate on the streets at designated hours. The reasoning goes that if certain key streets in the CBD are turned into pedestrian zones, hawkers could operate with temporary stalls – from for example 5pm to 10pm, creating a vibrant street market that could also become a tourist attraction for out of town people walking through the city. The same system could go for the commuting node hawkers who could apply for licenses to operate from designated strips of lands adjacent to the pavement at set times of the day.

Traffic jam hawkers could instead be issued with “ambulating” licenses and be required to wear identification badges in such a way that people could distinguish them from would be car side-mirror thieves.

Finally the question of the food vendors needs to be tackled because they provide the most important service of the above-mentioned informal traders and as such deserve to be helped in the operation of their business instead of harassed and persecuted as so often is the case. The recent completion of a bridge and road on Riverside drive deserves note as a case study for how this could happen.

For years Riverside road traders have operated a small informal vegetable market and a series of stalls which have enjoyed a constant flow of business given the amount of people that regularly walk that route. Once the bridge was completed however, the traders – who all continue to pay a triweekly fee to operate there – were evicted from what was a wide strip of land to the side of the road, and sent further up the hill from which they were forced to work on a pile of rubble, in conditions which are unpractical, unhygienic and generally unpleasant. The strip of land on which they had originally operated has now been planted with strips on bouganville laced with barbed wire in case anyone decides to try and move back in. Obviously any attempt to plant greenery in a city which currently risks losing its moniker of “Green city in the Sun” is always welcome, but one can’t help but ask if this particular garden was really necessary. Would it have been so difficult to pave the stretch of land, assign some plots, maybe build some basic modern kiosks and allow these people to continue in a trade which was both useful and welcome?

The problems and their solutions are many and deserve a more thorough inspection. It would probably be worth setting up some kind of a symposium in order to bring together different stakeholder groups – hawkers, business owners, regular people, City askaris – and seriously discuss what can be done.

Nairobi is not a European city and should not attempt to emulate at all costs the orderly operation of these northern metropolitan environments. The solutions to its problems can be observed in other cities around Africa and Asia but should also be catered to fit its unique identity as the commercial capital of East Africa.

What remains to be seen is what approach Kidero will take when he finally succeeds in his efforts to purge the county’s administration of its endemically corrupt elements. 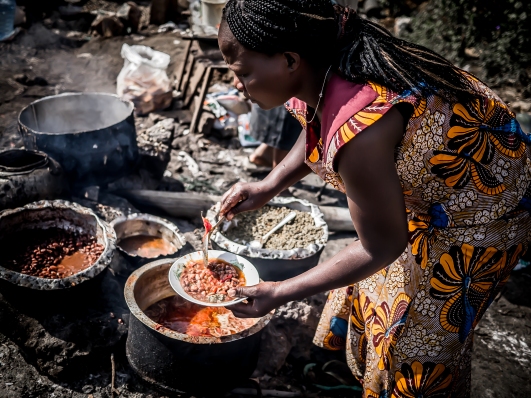