Young, disadvantaged, adolescent girls who grow up in a Nairobi slum have few opportunities when it comes to finding income generating opportunities that can allow them to buy basic necessities that their households cannot provide.

As a result, one of the options that girls who are knocking on the doors of adulthood perceive to be viable, is to use their bodies as means to acquire what they feel they are missing.

Although it is but a small percentage of girls growing up without much family backup in the slums who embark on this route, it is nevertheless a trend that exists and for which a proper solution has yet to be proposed. 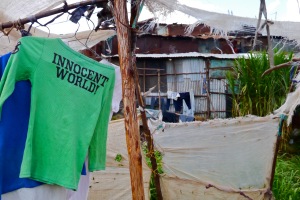 “Girls that don’t have the support of a family network are either forced to make it by themselves or find some kind of an organization or individual who will help them”, says Sue Maisha, a Kenyan sex worker who’s blog Nairobi Nights has gone a long way towards shedding light on what it means to engage in this line of work in a city like Nairobi. According to Sue: “The choice will largely boil down to a question of what kind of values they have been brought up with and how desperate and/or resourceful they are”.

While for young boys there have traditionally been more avenues with which to raise a bit of extra money in their out-of-school hours, girls are presented with a dearth of opportunities when it comes to finding some form of non-exploitative gainful employment. If they do not have chores to do at home, girls might attempt to find someone in the neighborhood that will employ them to do housework; alternatively they can hope to find work at one of the local breweries (that make illicit or traditional homebrews and are populated by the most insalubrious of types) or decide to become a street kid and raise some money by begging in town.

Another issue girls have to contend with as they reach adolescence is a lack of respect on the part of many male members of the community. “There is a hesitation by some men to respect them as girls who are coming of age”, Sue tells us: “they treat them as objects and not as fully grown women who play the same important role as their mothers within the community”.

This can result in girls being pressured to engage in sexual activity at a very young age, a practice which often results in undesired pregnancies and a rejection on the part of the family in whose eyes the girl is now adult and no longer needing of family support.

Sue, who did not grow up in the slums and who comes from a financially stable background, understands the situation like this: “youths or married men living in slums target young and vulnerable girls. They offer them material objects in exchange for sexual favors, but also provide them with a sense of security and reassurance about life in general. These men know that the girls feel defenseless and exploit this sense of vulnerability for their own gain”

Without a strong family and community network to ensure young girls do not end up embarking on a route that might not work in their favour, the other options they have are to surround themselves with a strong group of friends who can look out for each other, make use of the local church or mosque groups or enroll in a youth group which will provide support and take the place of a family.

It is in these alternative support networks that any kind of an intervention aimed at preventing girls from slipping into a lifestyle from which it is difficult to extract oneself should focus on supporting. Thus for example, the Mathare-based youth group MYTO  (Mathare Youth Talent Organization) focuses on providing its members with a support network that they can turn to in times of need but also with providing small income generating opportunities and community building exercises. In addition to this, MYTO also run participatory-theatre exercises, though which girls can explore their options and imagine alternative choices for themselves.

MYTO also provides the occasional informative sessions in which girls can discuss about their sexual health issues. Sue, who has been asked to participate in similar groups elsewhere, says that: “the session I was asked to participate in involved teenage girls talking about men, sex, periods, condoms etc in a free, open space. Our role was to act as “big sisters”, in order to lay down some facts we felt it was important for them to know (we did not, however, divulge the exact nature of our employment)”.

Youth and church groups strive to create social capital where it is most lacking. Moral fiber, the ability to distinguish right from wrong, the ability to make choices that will ultimately be beneficial, are not only down to personal choice but to the values the people who surround us hold.

It is important to be able to raise the capabilities of already-existing groups and networks to be able to provide the support disadvantaged youth in slums so desperately need. As a result, government and NGO poverty-alleviation programs in slums should focus on strengthening existing networks, creating capacity training to existing mentors and building up the social capital that is the backbone of any community.