Upendo Hero: No Cape in Sight

One sunny Sunday afternoon in April last year, the inhabitants of Nairobi’s largest slum, Kibera, were treated to an out of the ordinary sight.

The streets of Kibera on a weekend are party to many a colourful procession, with groups of people from different Christian persuasions parading through the main thoroughfares of the slum. This, however, was a different sort of procession: the participants were not parading in the name of God but in the name of Public Space and everyone involved donned red cardboard heart-shaped masks.

Leading the crowd was a figure dressed in a grey boiler suit and yellow kitchen gloves wearing a large papier-mâché heart over his head. This was the notoriously elusive Upendo (Love in Swahili) Hero, taking part in the demonstration in the name of creating new public land from the ashes of destruction. 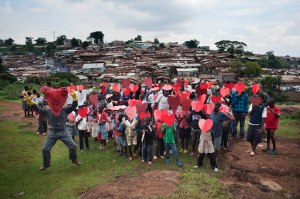 Who is Upendo Hero and what is his struggle?

In an article written by Vincenzo Cavallo, a Kenyan-based public space activist and unofficial Upendo Hero spokesperson, we read that: “Upendo Hero is a public space superhero (…), a defender of public space, a lover of Nairobi, a sworn enemy of gentrification and a soldier against the privatization of public space.”

Cavallo is one of the founders of the CBO Urban Mirror, an organization that has run several public space and public art initiatives in Kenya over the last few years. One of the ideas behind Urban Mirror has been to incorporate participatory methodologies as tools in the struggle to reclaim urban public space.

According to Silvia Gioiello, secretary of Urban Mirror, public space in slums is an important cause to fight for because it serves the role of managing a community’s social relations. “It’s that space in which one can temporarily escape one’s own individuality and share a common dimension,” Gioiello tells us. “It’s a moment in which people can leave the private sphere behind them in order to move to a collective conscience. It’s from this meeting and exchange with others that an awareness of one’s own state is born and with it a desire to claim one’s right to self-improvement”

Gioello’s views reflect a current a body of thought that underlines how the lack of awareness to public space in grand urban planning projects has, in many cases, caused social marginalization and stagnation. In the book The Creative City – a toolkit for creative innovators, the author and urban change innovator Charles Landry writes that:

“Public Space is a physical setting as well as an arena where exchange can occur through the variety of forms of communication from physical interaction to newspapers to cyberspace (…) The public realm helps to develop creativity because it allows people to go beyond their own circle of family, professional and social relations. The idea of the public realm is bound up with the ideas of discovery, of expanding one’s horizons, of the unknown, of surprise, of experiment and of adventure.”

In Kenya, back in 2008, during a workshop named Urban Wasaani, European public space activists and Kenyan musicians joined together to elaborate on the concept of public space. The European contingent came from a background that advocated squatting as a way to reclaim disused public spaces while the Kenyans heralded from the ghettos of Mombasa (Kenya’s second biggest city) and Nairobi.  Over the space of a week, the group worked towards drafting a project that would resound locally and open up a forum for debate about the importance of public space in a Kenyan urban context.

The project resulted in a participatory documentary called Maskani Flani, which featured the high-profile Mombasan HipHop group Ukoo Flani and was filmed in slums and official public spaces in Mombasa and Nairobi.

“Maskani Flani translates roughly as a Certain Place,” P.O.P, a member of Ukoo Flani and one of the main characters in the documentary tells us. “We decided to call it this because in Mombasan neighbourhoods the Maskani is an area in which people gather together.

Maskanis represent an important part of our culture because they provide a space for people to be out of their compound. They are a place where people feel safe, a circle where someone from the neighbourhood can come and discuss his or her problems. Maskanis in the community serve as a forum for debate, an educational area and a support group for women and vulnerable people.”

P.O.P, who later became chairman of Urban Mirror – itself a result of the Urban Wasaani project, underlines that Maskanis are mainly a feature of unplanned neighbourhoods that have grown up organically without any form of government oversight.

“Rich people” P.O.P tells us, “don’t have Maskanis because they have big houses with gardens where they can meet and talk. When they are not at home they can go to private clubs or shopping malls but these are not to be confused with Maskanis which are a non-private and non-commercial spaces”.

According to P.O.P, Maskanis became a target of the government following the 1982 failed coup on president Daniel Arap Moi. “President Moi” he tells us,  “believed that Maskani’s were an engine of popular unrest. He closed down all the local breweries, imposed curfews and laws that limited the amount of people that could congregate in a public area.”

Maskanis also came under threat because of the pressures brought on by a rapidly expanding urban population and the resulting housing boom. “In Mombasa, the government has brought us heroin and taken away our public space,” P.O.P tells us. “Even in Nairobi you can see it in all the slums: where are the football pitches? Where are the community centres? People in poor neighbourhoods have no place to congregate beyond their church halls. Is it so surprising that youth end up involved in drugs and crime? They have nowhere to go in the community for advice, support and someone to look up to!”

The purpose of Urban Mirror is to provide a platform that, with the help of like-minded thinkers and artists, attempts to develop, as Cavallo puts it: “an alternative narrative which does not see shopping malls as public spaces, and which calls upon artists to create public spaces – places in which all citizens, regardless of wealth, religion, gender, sexuality or ethnicity, can enjoy life freely (…) Urban Mirror advocates for the protection of existing ‘commons’ as well as the creation of new ones, in contrast to the neoliberal narrative that is pushing our society to privatize everything.”

Upendo Hero was born out of an Urban Mirror initiative and quickly became the spearhead of the movement. Cavallo writes that: “Upendo Hero, is a public space superhero. He was born out of a campaign called ‘I Love NRB’ and became a new vision for Nairobi (…) Instead of creating participatory events, Urban Mirror created a participatory character. Upendo Hero became an open source, public space superhero – free for anyone to use as their own; an identity open to everyone.”

So why was Upendo Hero leading a procession of people through the streets of Kibera on that Sunday afternoon?

Shortly after the parade, an article appeared in UP Nairobi, a local magazine, in which Upendo Hero explained the action and why he had felt it was important to take part. The point of the parade, he wrote, was to target a building that was owned by the government and had been destroyed during the post-election violence.

In the months following-up to the parade, a group of street artists that go by the name of Spray Uzi had, with the help of a local Karate group, begun clearing up the space and using it for art projects and training. The idea was to fully “convert the place into a space for the youths of Kibera, a place where they can develop their talent and avoid bad company, a venue for visual street artists and a place where Kibera people can come and heal the wounds of the post election violence.”

The point of the parade was to support Kiberans in their struggle for public space and make the government understand that it is time to give space to these youths so they can show us the way forward. The parade intended to compliment the work that had already been begun on the building and raise awareness amongst local residents as to the importance of securing the space for ongoing use by the community.

Unfortunately though, no one seemed to take the bait and the building is today pretty much as it was on the day of the parade. Although the Karate group has continued to maintain the place and use it as a training space, there has been no move on the part of the community to formally take possession of the building.

It’s hard to quantify the lasting results of initiatives of this kind. Upendo Hero is without a doubt a very important Nairobian and his struggle to valorize public space and hence the common wananchi (citizens) means he a much-loved and recognizable figure throughout the city and its slums.

Upendo Hero’s struggle for public space is less about changing government policies and more about raising awareness that public space is something that communities have a right to.

“Fundamentally ours is a celebration of public space,” concludes Gioiello. “By celebrating it we hope to give it value, importance and meaning and to contribute, as a result, to spreading the philosophy of public space”

This article was originally published on urb.im in October 2012